Rules and Regulations for Car Travel with your Dog

Rules and Regulations for Car Travel with your Dog

As a nation of animal lovers, Australian motorists regularly transport their canine companions. The majority of Australians would agree that wearing a seatbelt is an important safety measure, however, unnervingly many have never used a dog harness or seatbelt to keep their dog secure.

Rules introduced in Australia in 2013 prohibit a pet being in the driver’s area of a vehicle for safety reasons.

SO WHAT ARE THE RULES AND REGULATIONS?

Driving with your dog on your lap is an offence in ALL parts of Australia. ALL states & territories in Australia require the driver to have proper control of a vehicle. The driver must have a clear unobstructed view of the road, and traffic, ahead, behind and to each side of the driver.

The police can give a driver an infringement notice if your dog is jumping around the car, allowing a dog to hang out a car window, creating a distraction or causing the driver to not be in full control of the vehicle.

It is an offence for your dog to obstruct your vision or distract you or other drivers.

There’s no rule about a dog riding secured in the front passenger seat, but please be mindful of the fact that airbags deploy with incredible force, and can seriously injure or even kill a dog if it is struck by an exploding airbag.

Similarly the road rules do not specifically require an animal to be restrained with a harness or seatbelt tether while travelling inside a vehicle. However the merits of restraining your dog/s whilst in the car are quite clear. Not only for their safety but those of the driver and other passengers travelling in the car.

Not tethering your dog on the back of a utility or truck is very dangerous. Failing to tether a dog on a ute is an offence in ALL parts of Australia (except NT)4. Dogs must be by some means, enclosed or restrained to prevent the dog from escaping or falling from a stationary or moving vehicle  (other than a dog being used to work livestock).

The RSPCA can also issue fines under The Prevention of Cruelty to Animals Act1. In NSW if an animal is injured because it was unrestrained, owners face up to six months’ jail and fines of up to $11,0002. Carrying dogs untethered on the backs of utes can also land drivers with the same penalties.

In NSW the Roads and Maritime Services (RMS) advises that police can fine a driver and issue demerit points if an animal is causing the driver to be not in full control of the vehicle, or if they are driving with a dog on their lap. The penalties (at the time this article was written) are three demerit points and $469 (4 demerit points and $587 in a school zone)3.

RSPCA Recommendations for Travelling with Pets

“It is not uncommon to see dogs not only sitting on the drivers lap but from time to time standing upright resting their front paws on either the steering wheel or driver’s side window. We have even had cases where the pet had jumped down into the driver’s foot well area making it difficult for the driver to brake.

This can be dangerous for a number of reasons. A pet standing or sitting on a drivers lap could interfere with the driver’s ability to steer, indicate or even obscure the drivers view. It is also dangerous for the pet should a vehicle be involved in a collision. Your pet would likely be injured if thrown around the cabin of your vehicle or injured by a deploying air bag. Dogs travelling in the back of vehicles such as utilities should also be secured by a leash to prevent them either accidentally falling from the vehicle or being ejected from the vehicle in the case of a collision.”

SHOULD I RESTRAIN MY DOG WHEN TRAVELLING IN THE CAR?

In short, yes. Restraining your dog will provide a number of safety benefits to both your dog and the occupants of the vehicle. RSPCA statistics reveal about 5000 dogs each year are injured or killed in Australia as a result of falling from a moving vehicle. 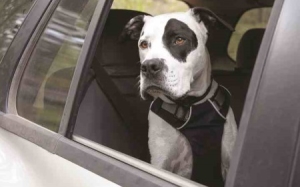 – Properly restrained dogs cannot move around inside the vehicle and will therefore reduce distraction to the driver.

– In a crash or under heavy braking a properly restrained dog is less likely to become airborne, decreasing the risk of serious injury to the dog, the driver and other passengers, or other vehicles.

– Restraining your dog may also prevent it from jumping out of the car’s window or from the back of a ute/truck which could cause injury to the dog and other road users.

WHAT ARE MY OPTIONS? 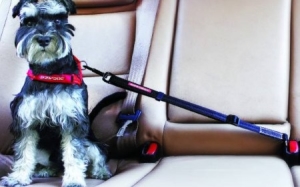 here are a large range of options available to owners wanting to restrain dogs comfortably and safely during travel. A popular option is to use a car harness that secures your dog by either linking to the seat belt system or using a seat belt attachment. Measure your dog correctly and buy a harness of the right size to ensure comfort and security. Ensure that you fit the harness correctly. (Please do not allow your pets to travel on the front passenger seat if your car is fitted with airbags as this could be fatal for your pet in an accident. We also recommend that seat belt attachments be used with harnesses rather than attaching directly to your dogs collar.)

For dogs travelling in the rear seat area of the vehicle you can use a hammock seat cover or front seat barrier to restrict access to the front seats. These can be used in combination with the harness and seat belt attachment for extra safety.

Dogs can travel in the open cargo area of a wagon type vehicle behind a cargo barrier or in travelling crates and containers. Make sure your pet has enough room to sit, stand, turn around easily and lie down in a comfortable position. You should also ensure that there is enough ventilation and airflow.

For smaller cats and dogs Pet Booster seats or Pet Baskets are another option.

Remember, if you love your dog look after it and restrain it when travelling!

On long journeys plan ahead and take your dog for a walk before setting off. Make a habit of stopping every couple of hours for a toilet break and the chance for your dog to stretch its legs.

Travelling with your pet has never been easier, view our complete range of travel essentials.